What’s all the excitement about LMR?

In the midst of the most significant petroleum downturn in decades, Canadians are concerned about the number of inactive and “orphan” oil and gas wells in western Canada and the associated public liability. At the same time, abandonment and reclamation costs are soaring, while the time and expense of getting to a reclamation certificate have ballooned. In these economically and politically uncertain times, environmental groups and the general public are urging politicians and regulators to set aggressive abandonment and reclamation timelines and hold the industry accountable.

The Alberta Energy Regulator (AER) and other officials – including the Orphan Well Association – were shocked this spring when the Alberta Court of Queen’s Bench ruled that receivers and trustees can selectively disclaim unprofitable assets under a section of the federal Bankruptcy and Insolvency Act. Before the ruling, the AER had priority in a bankruptcy, but the ruling suggests receivers can avoid abandonment, reclamation and remediation obligations laid out in provincial regulation. In effect, the AER’s Licensee Liability Rating (LLR) program is weakened, as federal bankruptcy rules trump provincial environmental regulations.

The AER moved quickly to try to mitigate the impact of this decision. Crucially, a new condition for transferring existing AER licenses, approvals and permits is that companies must demonstrate a Liability Management Ratio (LMR) of 2.0 or higher – that is the value of their producing wells must be twice the cost of abandoning and reclaiming the wells at the end of their productive life. This hurdle is 100 per cent higher than before the directive. Of course, applicants can meet the new criteria by posting security, addressing existing abandonment obligations, or transferring assets.

This can’t help but cool the pace of asset sales in Alberta, and is especially hard on smaller producers. It appears that two-thirds of companies licensed to operate in Alberta can no longer buy producing assets without paying a special deposit to the AER. 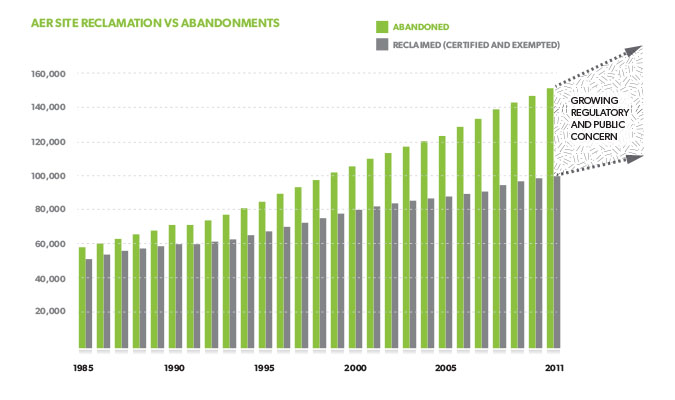 How Can We Help?

The other solution is to reduce the estimated liabilities in your portfolio. Terra-Sano and Terminis accepted a challenge from a mutual client in 2014. We developed a new integrated working model to take assets through downhole abandonment to achievement of a reclamation certificate. Over the past two years, we have proven the concept, providing consistent and demonstrable reductions in time and investment throughout the value chain.

Our approach was simple. We reviewed the client’s portfolio, identified and prioritized targets in the first six months, and then aggressively planned before pursuing targets within the first year. In year two, we applied a disciplined and focused capital program and swept a tight service area to maximize the closure/certificate rate in years three to five.

Our process is working, and it is time to apply it to a wider industry audience.